“I have the motivation to go to the gym at least four times a week, because I know that this is where my freedom of movement begins, the ability to live and function according to my age. Even though I can’t be sure that my body doesn’t have other surprises in store, I know for sure that a habit of exercising will help me overcome them and become stronger.”

I was 18 years old when back pain became common in my life. Quite quickly, it started to interfere with dancing, horse riding and many other things that I really liked. Soon, I had mornings when I could not get out of bed, because my legs simply did not obey me. I went for the surgery, although I knew that the chances of success were 50-50. I already tried all the gymnastic exercises and pain relievers, but to no avail. I walked on crutches and tried again to learn to trust my feet. They let me down so suddenly and so fully that I wanted to think carefully about each and every step. After a year, I was able to move quite freely, although I always had in mind that I needed to keep my back very straight at all times. But then the pains began to return – the operation turned out to be useless after all.

I just discovered pole dancing. It required more strength than I had, and I started going to the gym. The doctors still recommended that I do gymnastics and avoid strain, but it was difficult for me to give up a new hobby that I really enjoyed. How could I limit myself to gymnastics on the mat when I so wanted to move? By that time, I already really liked the gym; I went there almost four times a week and began to notice a clear trend towards less pain during training days. I read a lot of different studies, began to think more about my workouts and as a result of hard work got rid of pain again.

I’d love to summarize this story with a moral about how important and life-changing strength training can be, but soon I needed this lesson again in a new way. About a year and a half later, I woke up with severe nerve damage in my left leg. Blood circulation was impaired, I could not lean on my leg, I cried in pain, and at the same time I could pinch and prick my leg without feeling anything. It took several weeks for me to be able to move somehow. I had to re-invent the way I walk because the numb leg quite quickly forgot how to walk correctly.

New trials with doctors began. I tried to move at least a little to stay in shape, but my left leg was getting smaller and smaller in comparison with the right one, and the strength did not return in any way. I swallowed pills, and when I stopped, I wandered in a daze for almost a month, could not eat or walk for a long time. And no one could explain exactly why this happened; there was not a single direct reason. In the end, my knees, elbows and wrists started to hurt, and neurologists and orthopaedists, unable to do anything more with me, referred me to a rheumatologist, who finally diagnosed me with arthritis. My own immune system was trying to make me disabled. I was recommended water gymnastics, compresses and woollen socks. But I don’t know… Who at 24 would want to accept such recommendations? 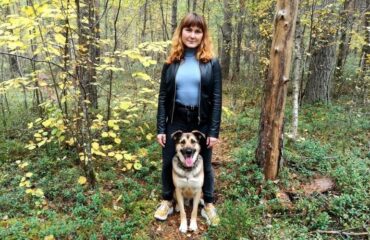 On the good days, I still tried to exercise a bit, but it took me almost a year to stand on my toes without support and really start using my left leg. However, on bad days, especially in autumn and winter, I found it difficult to even take chalk and write on the blackboard in the classroom. Every movement hurt, I felt tired all the time. Long-term improper walking has affected the health of other joints. After finding medications that made my situation a little easier, I started looking again for untested solutions: now all sports materials I read included the keyword “arthritis”.

Inspired by a physical therapist, who thought it was too early for me to classify myself as a senior citizen, I found that by focusing only on strength during workout, making reps small and weights heavy, I could manoeuvre past pain and still really train. At some point, there were days without pain at all.

It will soon be a year since I stopped taking painkillers on a regular basis. Sometimes there are still periods when there is inflammation in some joints, but this no longer prevents me from doing anything. I can run, I can ride, I can lift 120 kg without thinking that I have a weak back or need to be supported.

I have the motivation to go to the gym at least four times a week, because I know that this is where my freedom of movement begins, the ability to live and act according to my age. Even though I can’t be sure that my body doesn’t have other surprises in store, I know for sure that a habit of exercising will help me overcome them and become stronger.